On Saturday, April 11, #1 Roblox Game Adopt Me! launched its new ‘Dress Your Pets’ update with a live event, resulting in a peak CCU (Concurrent Players) of 1,615,085 players online at 9AM PST / 5PM BST. This marks a new World Record for players online in a game on the Roblox platform, beating the previous record of 707,814 by nearly 1 Million players. 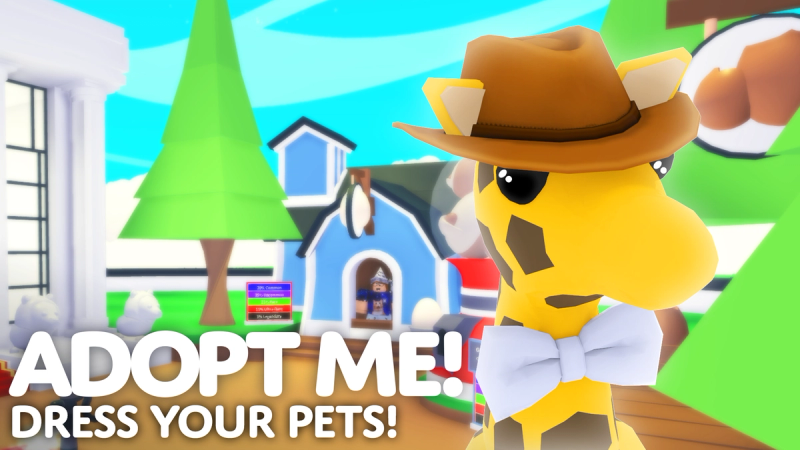 The ‘Dress your Pets’ update brought in a new, special feature into the game, giving players the ability to dress their pets, collect new pet wear, and make their favorite pets stand out from the crowd in style. The update launched with a live event, where a sunken ship rose out of the water and on to the shore as a live in-game countdown reached zero, transforming into the new Hat Shop. ‘Dress Your Pets’ is the 54th consecutive ‘weekly update’ released by the Adopt Me Team. 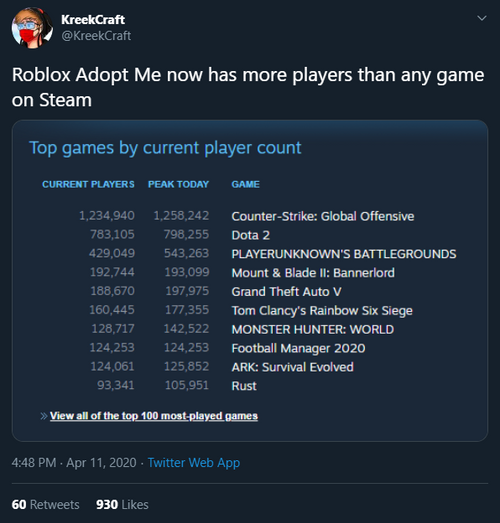 At the time of the record-breaking player count, Adopt Me! had more players online than every game on Steam, including top game Counter-Strike: Global Offensive, which was setting its own record for CCU of 1,270,315. This also included Dota 2, PUBG and the recently released Mount & Blade II: Bannerlord. Adopt Me now joins the limited collection of games who are lucky enough to have a peak of over 1 Million concurrent players. Twitter users jokingly suggested that the popular gun game should try adding cute pets to collect.

Since June 2019, the Adopt Me game studio has scaled from 4 to 29 team members, expanding to support the huge amount of growth. Roblox isn’t considered a serious platform by many gamers, but with professional game studios like Adopt Me and its games hitting record breaking numbers with a global community of over 42 Million players each month, that perception may be changing.

Press: For press enquiries and questions, reach out at press@playadopt.me.

About Adopt Me: Adopt Me is the #1 World Record holding game on the Roblox platform, enjoyed by a community of over 42 million monthly players across the world with a peak CCU of 1.6 Million players online. In Adopt Me players of all ages take part in a variety of positive, family-friendly online social activities including collecting 70+ cute pets, trading with other players to complete their collections, and decorating their homes in a safe world full of fun and adventure. Adopt Me is developed by the Adopt Me studio, a diverse team of 29 people distributed across the world.